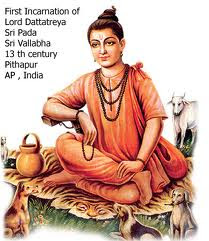 The Lord Dattatreya's First Avatar is Sripada Sripada Srivallabha. He has born on 1326e at Pitapuram Villag,(Its Near Samrlakota, East Godawari Dist., A.P.) on the day of Vinayaka Chavithi in Chitta Nakshatram, Simha Lagna(Leo), Tula Raasi(Libra). He is the third child in his family, he has 2 elder brothers and 2 younger sisters. His Parents are Sri Ghandikota Appala Raju Sarma & Smt. Sumathi Maharani. His Grand Father is Bapana Charyulu(In his previous birth he is the father of Lord Sri Krishna)

His birth secrecy is, when Appalaraja Sarma family was celebrating the Pitru Karma (shraaddha). (People are celebrate yearly once this ceremony to pay homage to the departed soul) In the after noon Bhikshuk(saint) came for bhiksha to Sarma's house. Before feeding the invited Brahmins, Sumathi Maharani has fed this Bhikshuk considering him as Lord Dattatreya. Dattatreya became quite happy and offered her a boon. She asked for a great knowledged son. Dattatreya Blessed her. She had before two sons, one is blind and lame. Dattatreya blessed her and saying that she will have world famous son who will be guru to all. Both husband and wife became very happy to hear the blessings from Lord Dattatreya, after on the day of Vinayaka Chathurdhi she had Shripada.

Now the Sripada Srivallabha Temple is in his Birth Place. You Can watch the pictures Below: 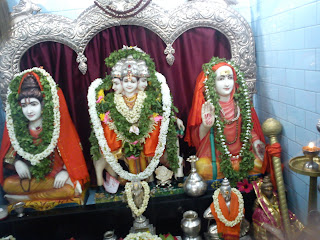 Sripada has given so many messages and showed so many miracles to the people from his childhood.

Every One Must see the Sripada Vallabha Padukas. That Paduka's Darshan available in the morning only. The temple will provide the cottages for every one. Sripada Sri Vallabha has showed so many miracles to his parents, close relatives, and people too... Sripada has spend most of the time in his Grand Parents house like( Bapanacharyulu's house, Subbayya setti's house, Narasimha Raju's house). 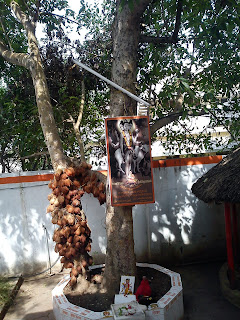 Audambar Vruksh is in temple premises only. Sripada has given lot of importance to this tree. In the "Kukuteswara Swamy Temple" premises there is Swayambu Dattatreya Temple. From an ancient time onwards every saint, people and bikshu has visited this temples.
"Digambara Digambara Sri Pada Vallabha Digambara"

Read This chant Daily once. You will get good prosperity in your lives.

The Sripada Srivallabha Charithra has written by "Sankara Bhattu". This book is available in Telugu, Hindi and English Languages. There are 53 Chapters, people did the sapthaha parayana in this temple. If you need this book you please contact below temple address. They will send that book through Register post. 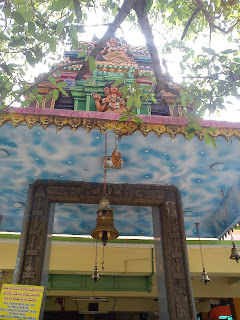 At the age of 16, he has left from his parents. After he has spend his time in Varanasi, Himalayas and Gokarna Kshetra etc., Most of the time he has spend in Kuravapur(Kurumgadda), Pachadev Pahad, it has located in Mukthal Mandal, Mahaboobnagar Dist. There is Krishna, Bheema & Amaraja Rivers Sangama Sthal. At the age of 33 he has anthardhan in this River Sangamam. The Temple Bell is Famous from ancient. Visit Sripada Srivallabha Temple Once and find Sripada Srivallabha Miracles. Now this temple is developed by Sri Sajjanagada Rama Dasu Ji. This temple is provided Nitya Annadanam for every day, the people believes that Lord Dattatreya has visited the Biksha in the afternoons. In the evenings every day temple is celebrate the "Pallaki Seva" for Lord Sripaa Srivallabha. The temple also celebrate the Gurupournami, Dattatreya Jayanthi, Sani Trayodasi Pradosha Pooja and on every month temple celebrate the Chitta Nakshatram special pooja's.


You can find the Swayambhu Dattatreya Temple in Kukkuteswara Swamy Temple Premises. The  trains routes are via Vijayawada Junction can reach Samalkota or Pitapuram., 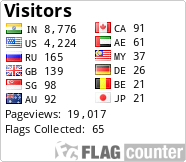 Free counters
Posted by geethareddy at 4:34 AM